It’s been quiet around here lately, and today’s post will explain just the reason! As many of you know, San Diego Comic Con happened recently, and with it came the first ever Geek Couture Fashion show. Scruffy and I were both lucky enough to be chosen to participate along with 34 other designers from around the country. I have to say, the competition was fierce!

I wasn’t really sure what to expect since this was the first year, but Ashley and her staff really put together something great. To recap, 36 designers were chosen to create a unique look based on various geeky licenses. These designs ranged from ready-to-wear outfits to extravagant gowns. 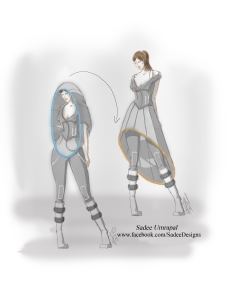 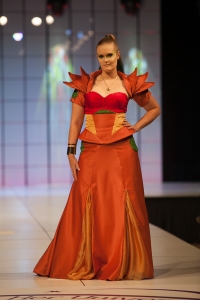 The designs then premiered on Thursday evening of SDCC on a 70 foot runway in front of an audience of 1000 people. Once the show ended, two winners, one audience and one judge, were chosen to be co-designers with Her Universe on a new line for 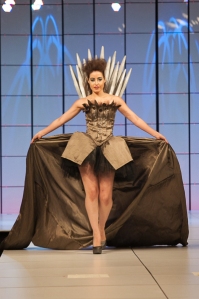 The designers ranged from hobby sewers to professional fashion designers, but most of all, they were all very passionate about their fandoms, which really came through in their designs.  I met some really wonderful people back stage and loved looking at all the details and discussing different inspirations and techniques for their garment.

Of course, the biggest part was the runway show. Designers were encouraged to wear their own designs, but many opted for models as well. Both Scruffy and I decided to make our runway debuts at the show. Talk about intimidating!

However, all went well, and the audience really responded and made the whole experience loads of fun. 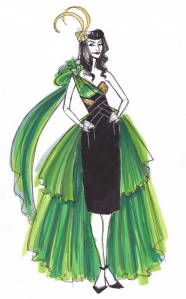 At the end of the show, it was time to find out who had won. I definitely didn’t envy the judges or audience given how many great designs there were. In addition to the winners, they also chose some honorable mentions.

For the judge’s award, the winner was Amy Beth Christenson Smith with her outfit inspired by the Delorean from Back to the Future. There was a ton of great detail in this including a bracelet that had the time displays. 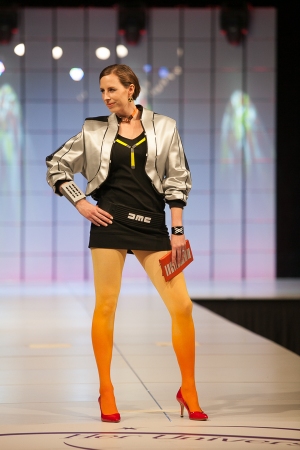 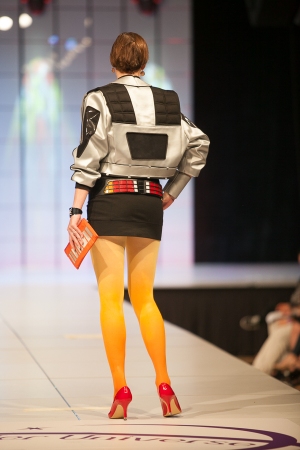 The two honorable mentions were Leetal Platt with her Dalek wedding dress and Cressie Lewis with her Hobbit wedding dress (those are pages of the book screen printed onto her ruffles!) 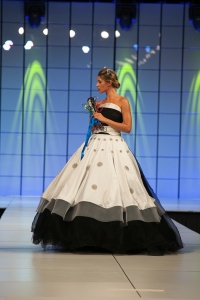 For the audience award, which was no surprise was Andrew MacLaine with his stunning transforming Regina design from Once Upon a Time. 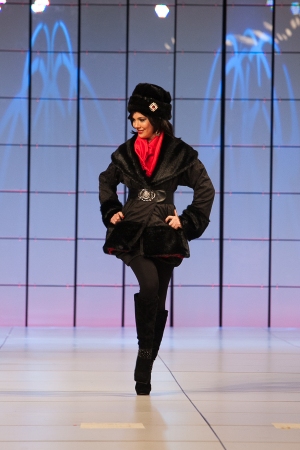 Check out this video of the transformation:

The two honorable mentions were Sam Skyler with her Pokemon inspired outfit (loved that jacket!) and Lauren Bregman’s Effie inspired gown from the Hunger Games. 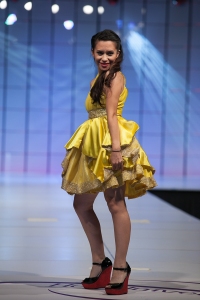 Would I participate in the show again? Absolutely! SDCC had such a great response that they’re dubbing Thursdays as Fashion Show night. I definitely have some ideas for next year and after seeing what people came up with, I know I want to push my designs even further.

Check out the rest of the designs from the show below:

If you want to check out more info on the designers, Her Universe will be doing a feature on each one every day for the next several weeks. Did any of you go to the show? Which was your favorite? Any of you interested in participating next year? Let us know in the comments or on our Facebook page!