Since we posted about various bags on Monday, I figured having a bag theme for Friday’s DIY would be the perfect way to wrap things up this week. I’ve been seeing a lot of ruffled bags lately, so I figured why not transform a regular tote into something a little more frilly and geeky?

I have been researching ruffle tutorials lately for an upcoming project, and when I stumbled across circle ruffles, I knew I had to give them a try. Normally, when creating ruffles, you can use either a ruffler foot for your sewing machine, or baste stitches on the top of your fabric, and then pull them together to create your ruffles. What’s great about the circle technique is that if your know the length of your ruffles, it’s easy to to create the ruffles to be that exact length. More on that below.

First, we start off  with a plain tote. I decided to go with black since it’s a little more formal. I had considered dying a bag as well, but couldn’t find a white one in the size I wanted. I then measured the bag. Originally, I wanted to create vertical ruffles, so that’s the length I measured.

Not the bag I used, but an example of the type of tote to get

For my outer circle, I just traced around a mixing bowl I had. The widest parts were roughly 3 inches, so I just measured 3 inches out from my inner circle, and then just lined the bowl up. 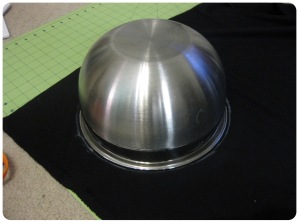 After that, I cut out the circle and was left with this.

Next, you cut one side, and when you stretch it straight, you have ruffles!

After cutting out all my ruffles, I pinned them onto the bag, and determined I liked how the horizontal ruffles looked better than vertical. Sew those onto the bag taking care not to sew through the bag. 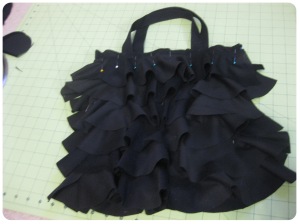 Next, I created the top band. I actually used a bias tape maker to create a one inch band. You don’t need one of these, I mostly wanted to play with the new toy I bought. Essentially, you just want to fold the edges under and then iron it so you have a strip of fabric. Sew the band to the bag. 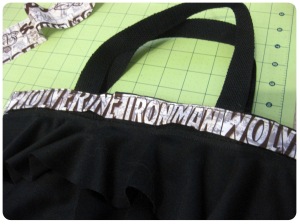 Lastly, I just used some fabric glue to add decorative trim on the bag. I wanted to add something that would hide the transition between the top band and the top ruffle. Plus, I liked the way it looked! I also decided to add a bow, similar to the one in this DIY Friday, just to give it a little something extra.

Here’s how the bag looked after all was said and done.

Normally. I’m not a fan of totes, but I may have to make an exception in this case. What do you think? Have you made or bought any geeky bags lately?

I’ll be at PAX this weekend and Scruffy will be at Dragon*Con. We hope to catch some of you in geeky gear, so keep an eye out for us. Have a great weekend!